Skip to content
Make sure to read the title in a Minnesota accent if you haven’t already.
***

I wonder how many blog posts are written in airports? Add another one to the list.  Sitting here waiting on my flight and thinking about what a great time I had at the Minneapolis SQLSaturday.  I flew in on Friday and got to the hotel with no issues.  Relax for a bit and get Kalamazoo blog post done and head over to the speaker dinner at Don Pablos.  This beer gal does on a rare occasion enjoy a margarita so had one and chatted with some excellent people.  They gave us our speaker shirts and a nice suprise, a super soft throw with SQLSaturday embroidered on it.  They are very nice!  Thank you so much organizers!

Then comes the day of the event.  I ride over with Ted Krueger (blog|twitter) and the whole family.  The little Kruegers were cracking me up the whole way.  They had the event at the University of Minnesota.  The site was really nice and it was a gorgeous day out.  The venue was split between 2 buildings so was a little sunshine break in between sessions.  I find my room and get ready for the shared session with Ted, Consulting – The Good, The Bad, The Ugly.  Was really fun doing this session again and under better circumstances than the first time.  It was a last minute creation for SQLSaturday Indianapolis due to a speaker who had to miss the event.  We had time to actually prepare so it felt more fluid this go round.  We had a really nice turnout and fantastic interaction with the audience which is always key to making it great.  We ended up being dead on the money timing wise too which was good.

Then I head over to catch Lara Rubbelke’s (blog|twitter) session, Big Data.  She had some internet connectivity issues but was prepared with a slideshow with screenshots.  I was super impressed with the way she handled it.  I know very little about Hadoop so learned a lot in her session.  She has a wonderful presence that brings to mind like a term that not sure is a real thing but will make up one…technical grace. 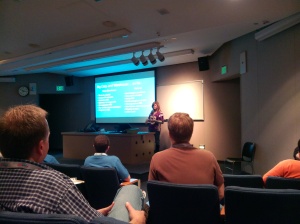 I had to leave a few minutes early to get over to prepare for the WIT panel discussion.  That went well but am kicking myself a bit for that one.  I have been on the panel plenty but I had never been in the role of moderator and I think it showed.  The discussion was really good though. We talked about work life balance or as Microsoft terms it “work life integration”.  I had just fantastic ladies who agreed to be on the panel: Jes Borland (blog|twitter), Amanda Bates (twitter), and Lara Rubbelke.  The audience participation and comments were great! There was one comment from a participant that really stuck with me “Work is not who I am”.  She said she wasn’t willing to let her work be the sole definition of who she was as a person.  I think I need to keep some more of that in my mind when I determine my own balance in my life.  My kids always come first but I feel sometimes outside of them I teeter on the edge of being driven and driving myself too hard.  Thank you to the panel and audience again!

Then after wandering around unable to find the room for a bit I finally find Ted’s session on merge replication.  I brought the rest of my lunch with me as didn’t have a chance to eat much during the WIT discussion.  So felt like giant jerk disrupting the session trying to open my bag of chips and then even better when my phone starts vibrating during it.  Ted’s of course good at giving me grief and I totally deserved it.  So from then on I catch great info on merge replication and watch his son heckle him a bit during his session. 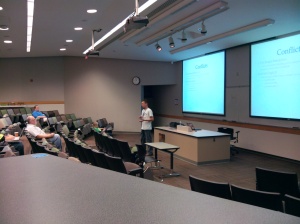 From there I go watch Joe Sack’s (blog|twitter) presentation on “Resolving Cardinality Estimation Issues”.  I definitely knew of Joe but had never seen him speak.  I am so glad I did, he’s definitely one to go on the super human smart, intellectual crush list.  He gave a lot of exceptional information.  There was a great moment when he was discussing correlated column statistics when someone in the audience said “Oh crap!” when realized that auto statistics are only on single columns.  VERY good session!

Then was super excited to catch Robert Davis (blog|twitter) give session on corruption.  I really had been looking forward to meeting him in person.  I knew him by his reputation and on Twitter.  He gave a lot of wonderful information in his session and went through some corruption scenarios and resolution to them.  He’s also one of those many folks I have met that have me just floored by the amount they know of SQL Server.  They are called MCMs for a reason.

I then head over to the closing ceremony which took a very long time due to the amount of top notch stuff from sponsors they were giving away.  Paul Timmerman (twitter) and folks did a fantastic job!  I’m sure it wasn’t as flawless as it appeared to me but I think that’s a excellent measure of a successful event.  Big props to you guys and all the volunteers. 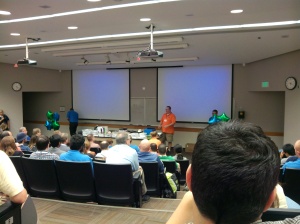 Tons of great stuff to giveaway – thanks sponsors!

From there we then go to Elsie’s for dinner and karaoke.  They bought a ton of appetizers but after my lesson learned in Atlanta (see blog post) I order a yummy burger with a fried egg on it and enjoy some Bell’s Two Hearted Ales.  And of course we were in Jason (blog|twitter) and Sarah Strate (blog|twitter) country so the SQLkaraoke began shortly after that.  I am still holding strong on not singing but god bless them all, they keep trying.

I had a wonderful time with my SQLFamily as I always do.  Thank you all for just being so damn great!  So I am a bit sad to think that’s my last SQLSaturday until probably spring next year.  But there are some super exciting things coming like PASS Summit!  So excited for the mass invasion of SQL folks in Seattle in just a few weeks!

One thought on “You Betcha SQLSaturday Minnesota Was Great!”