There’s no way I can fit the whole Summit experience into one blog post so going to break into a few posts.  Here’s my recap of my first couple of days heading out to the loveliness that is the PASS Summit 2012.

I flew out on Monday afternoon.  Flights were on time.  I had a stop on the same airplane in Kansas City.  I was off in la la land when I hear my name.  I look up and it’s Kevin Kline (blog|twitter)!  Was very excited to have my first SQL person sighting!  So head to the train with Mr. Kline and chat his ear off on the the whole way until they kick us off the train.  They had an issue with a bus in the tunnel so gave us the boot.  It turned out to barely be a bump in the road as there was a bus right there waiting and took us the rest of the way to  Westlake station.  I then catch Ted Kruger (blog|twitter), Jes Borland (blog|twitter), and Colin Stasiuk (blog|twitter).  I was starved and figured could grab a sandwich to go since they were on their way to Bush Garden.  I thought wrong.  It was just a hair past 8:00 PM which is when sandwich shops close downtown.  Ted and I end up finding a Bartlett (pharmacy/convenience store).  So yeah, I totally ate convenience store turkey sandwich and Doritos at Bush Garden.  It was actually not bad and didn’t get sick so good job Bartlett Pharmacy.  I finished my sandwich on the curb of Bush Garden though, I never considered Bush Garden as a restaurant so didn’t dawn on me that it would be a health code violation to bring in outside food.  Food was accomplished and then on to the wonderful spectacle that is SQL karaoke.  It was great and added bonus of being the first place for many sightings of my SQL family.  Running off of adrenaline and good SQL mojo vibes went to the Tap House after that and shut the place down.

I didn’t have too much going on Tuesday during the day other than the SQL Saturday organizer meeting.  That was really fantastic though!  You’ll probably remember I learned a lot doing my SQLSaturday (blog).  My scars from that always had me picking individual brains on what they did right/wrong for their SQLSaturdays but was wonderful to get a roomful of organizers sharing their experiences.  I got a lot of great information that I am taking back to Indianapolis with me.  Appreciate the organizers for setting up that meeting.  Thank you very much Kendal (blog|twitter), Karla (blog|twitter), and Niko (blog|twitter)! 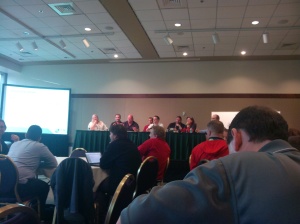 Then after some relaxation and a video chat with the family I head to the first timer orientation.  It was a bit chaotic but when you have that many folks enter a room at the same time you’ll have that.  At first they have folks trying to find their dedicated alumni volunteer that had been communicating with them prior to the Summit.  I really like having someone assigned to first timers getting them info and being available for questions prior to the Summit.  Just not sure feasible to have them try to meet at the event and it’s really not a necessary portion.  Just have alumni available and have them go and find a table to sit and chat with whoever.  Once they gave up on that and just had folks sit down it was fine and we all had great conversation.  I got to talk about the SQL community and peer pressure them to join Twitter and check out #sqlhelp so yeah I had a good time.  I hope they did too.  I did hear later one of my first timers succumbed to the peer pressure and joined Twitter…win!  Thank you so very much to Sarah Strate (blog|twitter)!  She put in overtime getting alumni volunteers and planning a great event.

From there was the welcome reception.  By this time I’m really floating on air.  I can’t throw a rock and not hit one of my SQL peeps.  I was really glad I was in the far room to have the chance to catch the flashmob and some of the quiz bowl.  I think they should have had some of the far room action on the screens in the other room.  Plenty of networking down there but wondered if folks on the other side had any idea what was going on down there.  From there made the trek to the speaker and volunteer party at the Garage.  Thank you to PASS for hosting a great party!  Caught up with lots of folks there.  It felt like I was somewhat isolated on a different planet since it was election day and very different from my usual election day back home.  The election caught up with us all though in the area down by the Garage.  Folks in Seattle were out in the streets partying it up…big time!  Come to find out in Washington they passed gay marriage and legal marijuana that day.  I never talk politics or religion in any place remotely related to work so not going to do it here.  No matter what side of the fence you are on, I had to admit it was really great seeing people happy about the electoral process.  With all the piss and vinegar and BS involved in politics it was nice to see people happy and see the instant impact it made on a large group of people.  Running off of SQL happiness go go adrenaline juice I made it a late night that was finished off at the Tap House.