Hard to believe but this was my first SQLSaturday of the year! Lately I have done a decent amount of user group presentations which are great, but there’s something special about a SQLSaturday.  Chicago’s was right after the PASS BA Conference so became an extension of some really great SQL goodness. I left straight from the last session to head over to Addison to get to the speaker dinner.  The dinner was at La Hacienda so caught up with friends over margaritas and good food.  We got a really nice, unique speaker gift: a solar powered phone charger.  The tree hugging hippie in me loves that!  Thank you again organizers!

Morning comes and I get to the venue at the DeVry campus just a hair before the first sessions start.  I head over to the speaker room and chat for just a few minutes.  Just then an attendee comes in to let us know that they had no speaker show up!  Ross LoForte and Ted Krueger (blog|twitter) rush over to the room to save the day.  Luke Jian (blog|twitter) and myself quickly follow to assist them.  It turned into a really good discussion with the attendees over different aspects of being a DBA.  The session evals were all very good so it worked out and very nice of everyone to jump in and assist.

Ted and Ross stepping in for a surprise spontaneous discussion on being a DBA.

From there I head to Erin Stellato’s (blog|twitter) session “Making the Leap from Profiler to Extended Events”.  She is such a stellar speaker and this was a fantastic topic.  I was a bit jealous of the topic that I didn’t think of it since it is a super common issue.  Extended events is one of those features that are great but just is taking the masses a long time to come around to using.  She did a good job showing it’s not such a beast anymore and some great things from Jonathan Keyhayias (blog|twitter) to make it even more helpful like his script to take a trace and convert to extended events.  Bravo Erin! 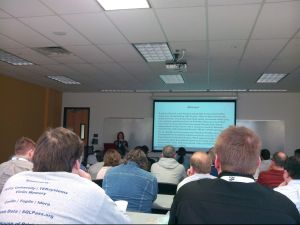 Erin showing folks there’s nothing to be afraid of with extended events.

After that I caught some lunch with a unicorn!

Lunch with a unicorn is supposed to be magical…not disturbing right?

Next I caught Josh Fennessy’s (blog|twitter) “Demystifying BISM and Tabular Mode SSAS” session.  I was caught off guard right away when he started as he said he had no slides.  Say what now?!  He did full session just talking and writing things out on the whiteboard.  I was really surprised and impressed at how well it worked too.  He had some of the best interaction with the audience I have seen maybe ever.  I feel like I would flounder like a fish doing something like that unless I practiced it like a fiend.  You rebel you, Mr. Fennessy!

For the next session I head to Neil Hambly’s (blog|twitter), “SQL Server 2012 Memory Management”.  I am always surprised at how little presentations there are on memory within SQL Server, at least that I have seen.  He did a good job though there were some quirks in demos.  I knew talking to him earlier he had laptop issues plague him.  Still was a great amount of info given and majority of demos went fine. 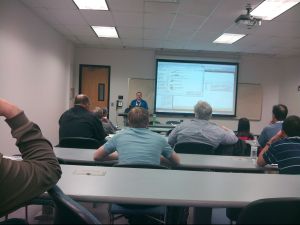 And last session of the day was when Ted and I gave our session on consulting.  It is always fun to do this one!  I was especially excited after hearing from someone who saw it in Minnesota a few months ago.  He immediately went from our session to a consulting booth who had sponsored the event and began talking to them.  They ended up hiring him and he’s enjoying the change.  How cool is that?!  Someone’s life was made better by a session I gave…there will never be better feedback than that!  Session went really well and we had a lot of interaction.  Always great too when other consultants come and participate.  Thank you Allan Hirt (blog|twitter) and Rick Krueger (blog|twitter) for adding the perspective and experiences of a independent consultant!  And thanks again Ted!

Thank you to the SQLSaturday Chicago team for having me as a speaker again and putting on a fantastic event!  Thanks also to my friends and SQLfamily for just being splendiferously (make sure I get credit for that new word) wonderful!