The beginning of the end day at Summit began and doesn’t take long to start running into people leaving and the good byes begin.  It’s so nice catching up with people that you may only see once a year, definitely sad when it’s over.  I made it in time to catch Lenny Lobel’s (blog) session on spatial data.  He was such a vital role in my learning of spatial data, was very excited to see his session.  He concentrates more on the development side so nice seeing some applications involving spatial data.  And also one of his queries helped to trigger a potential method to help me with an interesting question I got while in Orlando.  After his session I went to the Birds of a Feather luncheon.  It’s a lunch where they have tables that contain topics and assign some expert resources to sit at them.  It’s a great one and I always have good conversation.  I ended up sitting with folks at the replication table.  Interesting hearing some experiences with it and some large applications using it. 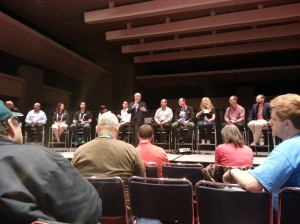 After lunch I made it over for the PASS Board Q&A.  It is an opportunity to ask the entire panel of board members questions.  If you have any issues or concerns, it’s the one opportunity I know of to get them answered directly.  I didn’t have any grievances to air but it normally is good conversation and nice to hear the thinking behind decisions made.  It was very interesting to hear outcomes of the BA Conferences since it was a new endeavor.  Next I went to a session on Always On that was done by a customer panel.  I love hearing people and their experiences!  This panel contained people who have some very challenging environments.  Enjoyed hearing what they had implemented to assist in those challenges.  After that was the last session of the day and Summit.  I went to see my friend and colleague at BlueGranite, Josh Fennessy (blog|twitter) and his session on Excel 2013 for analytics.  It was an excellent session and I’ve already used some of the material I learned there.  Josh always seems so very relaxed in his sessions.  I knew he was a little nervous and it was almost sickening how it didn’t show AT ALL. 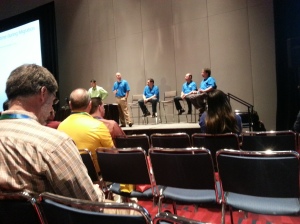 Josh in his session on analytics in Excel 2013

And then it was over!  I went over to the community zone again to make sure to say goodbye to as many as I could.  I then went with a large group of SQLfamily to a nice dinner at Fleming’s.  It was very relaxing to sit down to a great meal where they brought the food to me.  After that went to Dillinger’s for one last drink and called it an early night since my flight was fairly early next morning.

It was so great seeing so many wonderful SQL family members!  I have said several times that getting involved in this community has forever changed my life and career!  I couldn’t help reflecting on things at Summit since I got to speak this year after trying for so long.  I am honored to be considered caliber to speak at this wonderful event!  I am so grateful to the extremely long list of people in the community who helped encourage me to get out there and helped stop some of the negative voices in my head.  You know the ones saying things like “who wants to hear what you have to say when they have <insert super smart other speaker> out there giving sessions”.  I am still just amazed at the good nature of this community and I will keep making sure I do my part to make sure it stays that way.