Last weekend was SQLSaturday Kalamazoo.  This lovely little SQLSaturday has worked it’s way onto my regular yearly list.  It’s a short little drive from me in Indy and the people involved are wonderful!  Didn’t need more reasons but is also now home base for my company, BlueGranite.  Stormy weather ended up delaying my departure up there on Friday.  Trick or treating was postponed on Thursday to Friday for the first time that I can remember.  My kids are 8 and 5 so there is no way I was going to miss trick or treating so I missed the speaker dinner.  It was at a brewery that I’ve never been to so was sad to miss it.  I had a good time running around the neighborhood with Wolverine and a ninja though.  So we get to Kalamazoo around 11:00 pm.  My husband, Rod, went with me again in further efforts to get him hooked on SQLFamily (insert evil mwa-haha laugh).

Gareth helping out at the PASS booth

Get up and get a quick workout before heading over to the venue.  My session wasn’t until after lunch which is a pretty nice slot to have, late enough to get settled and time to run through demos but not super late.  I am normally distracted with my own session until it’s over so stinks a bit as I don’t normally attend sessions before mine.  They had an amazing lineup so was a little bummed to miss so many great presentations.  It gave me time to chat with many of the folks from BlueGranite though.  We had 4 speakers represented and then Josh (twitter|blog) and Amy (twitter) organizing!  We were also a sponsor so got to meet Mike Depoian (linkedin), VP of sales as he assisted at our booth.  Being a completely remote company, was a great opportunity to put faces to Lync avatars.

Amy at the BlueGranite booth

My session came after a nice taco bar lunch.  I am so jealous of those who have venues that allow outside caterers.  I just love the taco setup for a big group like that and is nice change of pace.  So nice and stuffed in a super hot room….zzzz!  No it turned out well even though I was a little nervous with this one as I hadn’t done it for several months.  I was more worried that I was on a new laptop.  I had only had the new machine for a few days and had installed the latest bits for everything I could.  Little nerve wracking but it gave me an opportunity to get folks info on some new performance counters for SQL Server 2014 which was great.  Everything seemed to go well and I got wonderful feedback.  Thank you for everyone who came to my session and especially those who gave feedback! 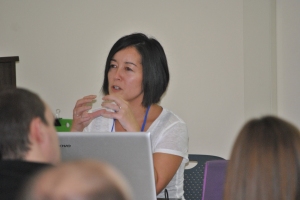 Talking about performance counters or describing a cheeseburger?

Then gave big sigh and decompressed a bit.  Ended up only in the last session of the day for Michael Swart’s (twitter|blog) session “5 Easy Pieces”.  I love hearing of people’s experiences, soaking up others wisdom.  He is another one of those lovely polite Canadians and had some great stories to tell.  I especially loved the one on indexed views.  He had a situation where the difference of edition to standard threw off performance in relation to an indexed view.  He had to use WITH (NOEXPAND) to resolve it.  Great session Michael!  I enjoyed it very much.

After giveaways most of the speakers went over to The Mix.  I was a little nervous as it was a bit of a young pup bar on college campus but it turned out really fun.  Josh and team had setup a KJ to perform, yes karaoke.  The KJ was a good one and won me over with a rendition of Run DMC’s “Tricky”.  I think I am going to go with the angle that I didn’t karaoke that night.  I don’t think that which may be construed as me doing karaoke counts.  Can I keep my record?  After The Mix we head back to one of the hotels for hanging out and some Cards Against Humanity. 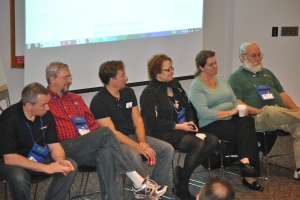 The end to a really great weekend was made even better due to the graciousness of those fine Ford folks.  Tim (twitter|blog) and Amy hosted a really nice brunch for everyone at their house.  Thank you both so much for that!  It really ended the weekend perfectly!  The event was flawless from my point of view and got a nicely timed post Summit SQLFamily fix!  Oh and we got great jackets!  I didn’t think they could top the nice jackets from last year but they did!  Check those pictures…they look great!  Thanks for having me up to speak and for the super nice jacket!  Josh, you guys did a great job!  Congrats on a wonderful SQLSaturday!  Also thank you to my hubby Rod for taking all the great pictures.  If you want to see the full set of them they are uploaded to link below.

Prize giveaways at the end of SQLSaturday Kalamazoo

One thought on “SQLSaturday 256 – Kalamazoo”