After my normal holiday hiatus from speaking, nice to get out to some early SQLSaturdays to begin this year.  First up was Nashville.  The Nashville event is great for so many reasons but it holds an ooey gooey sentimental spot in my heart.  Nashville was where I gave my first presentation at a SQLSaturday.  It was also being led by my dear friend/sqlfamily, Tamera Clark (twitter|blog) so I just HAD to go.  It was about 5 hours from me so I drove down on Wednesday.  Went down little early to do some work on a project.  My BlueGranite colleague, Josh Fennessy, (twitter|blog) was also speaking so took opportunity to work with real live person, in person!

SQLSaturday events began with the speaker dinner was at a very funky place called Saffire.  It was in an interesting old factory.  Good food, good beer, and plenty of catch up time. 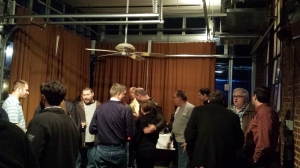 Event day comes early to setup the booth for BlueGranite.  So extremely proud that my company helps to support these events!  We meet great people all over for both opportunities but especially for recruiting.  I know the last 4+ people hired at least seem to have been plucked from the SQL Server community.  Just a fantastic thing! 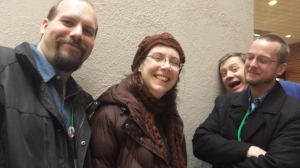 We just have no fun at these events.

After time chatting up folks at the BlueGranite booth I head to the WIT panel discussion.  Wendy Pastrick (twitter|blog) was the moderator.  The super lovely panel included Arlene Gray (twitter|LinkedIn), Rie Irish (twitter), Julie Smith (twitter|blog), and myself.  It was a nice refreshing discussion that had very little to do with gender.  The topic was just in general how to keep the young whipper snappers going into IT positions.  One of my favorite points was made by David Maxwell (twitter|blog).  He expressed that folks in IT like to complain and rant.  It’s how we bond and let off steam which is fine.  We should also be aware though if we always are stressing the negative.  We like our jobs and it drives a lot of passion in us.  We need to make sure, especially with young ones, not to let the complaints always take over the conversation.

After that was my session on SQL Server server performance.  It went pretty well.  I got some great ideas to tweak that presentation from Rob (twitter|blog) and Julie.  Thanks guys!

After my session I was able to catch Denny Cherry’s (twitter|blog) presentation on indexing internals.  He’s on the west coast so not very often outside of Summit that I am able to catch him speak so was excited about that.  Excellent stuff! 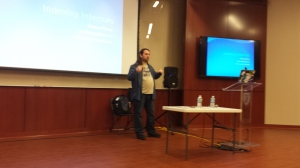 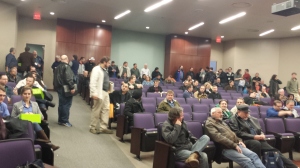 People streaming in for the prize drawings to wrap up Nashville.

Up next was Cleveland this past weekend.  I missed Cleveland last year and pretty much made up my mind then and there that I would not miss it this year.  As I was submitting, started looking at the schedule and then began to have a bit of organizer envy.  It was really a phenomenal line up and was honored to be a part of it.  So Friday I get some work done in the morning and then drive over in time to make it to the speaker dinner.  The dinner was at an Italian restaurant and they had a nice sit down meal.

Blurry but here is speaker dinner in Cleveland.

Saturday began again very early to setup the BlueGranite booth.  Again very proud for being a sponsor for this event and for such a strong presence of speakers.  Cory Stephenson (twitter|LinkedIn) also helped organize the event.  I spent most of the day at the booth having great conversations.  The booth had a nice spot right next to the curly slide.  Yes I said slide, no typo there.  Hyland Software’s building had a couple slides…how cool is that?! 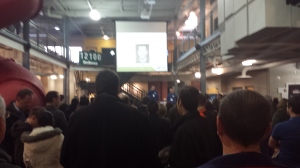 View from the booth next to the slide.

My presentation was in the afternoon and it went pretty well.  I gave my most favorite session…spatial data.  The conversation during that session gave me a lot of great ideas for making some tweaks to it.  Thank you very much to those who came and gave feedback.  Check out my favorite feedback from David Maxwell’s 11 year old daughter below.

What could the speaker do differently to improve? – I saw some confused faces in the crowd.  Check to make sure everybody is on the same page before you move on to the next bit of your presentation.

11 years old!  And excellent advice!  David make sure when she enters the workforce that she sends me her resume!  Also really wonderful you took her to a SQLSaturday as well.  I hope she enjoyed it!  I am hoping to take my daughter to one this summer as well.  Love seeing the little ladies being exposed to great people in the technical field. 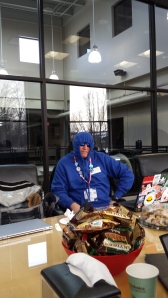 The after party was at Dave and Busters.  It was nice to sit and relax after a long day.  Had some very interesting conversation with sqlfamily that included zombies and tilapia (don’t ask).  After that was some Cards Against Humanity.

The next morning catch some breakfast with some SQL Family before heading back home.  The snow overnight made the journey back a little stressful.  The roads were really horrendous through most of Ohio.  Just another hit from the winter without end.  I still would do it again.  Both events were top notch and thank you for having me.  Will be taking some ideas back for the next SQLSaturday in Indy (shameless plug pointer to website here).